Posted on November 23, 2013 by amentetneferet

we are very glad and pleased to announce that in the next few days our book
“EGYPTIAN RELIGIOUS CALENDAR – Great Year of Ra CDXIV-CDXV (2014 CE)”,
the Complete Egyptian Religious Calendar with all the religious prescriptions and the sacred festivities for the next year 2014 will be available on amazon!

This is the preview of the cover: 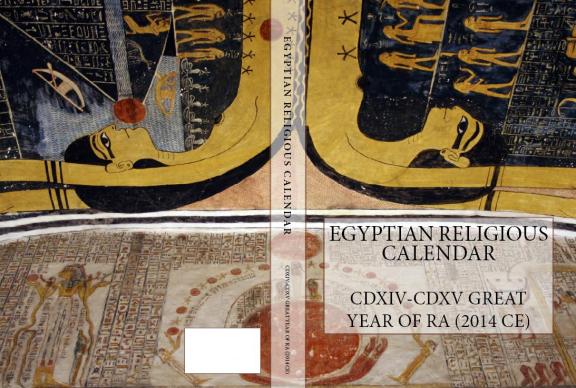 the two parts of the Sacred “Book of Nut”,
the “Book of Day” (at left, the end), and the “Book of Night” (at right,the beginning).
In the lower register, from right to left:
I scene (“He of the Hidden Chamber”, Osiris in a shrine), II scene (“Entrance of the bodies in the Nun”), and III scene (“Nut, the Mysterious One”) of the sacred “Book of the Earth”, section D (last part).
From the ceiling of the “House of Gold wherein one rests” (the burial chamber) of the “House of Eternity” of King Ramses VI, Valley of the Kings, KV 9, West Uaset (Diospolis Megale, Thebes)