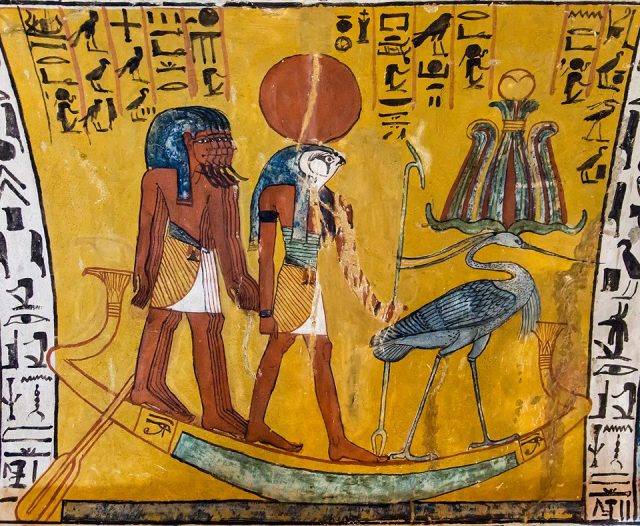 the God Ra-Harakhty-Atum (falcon-headed, wearing the Solar disk and holding the ‘Uas’-scepter) standing in His sacred barque, followed by five Gods called “the Gods of the Great Ennead Who are in the sacred barque of Ra”. On the prow, the ‘Benu’-bird (bnw), the sacred phoenix of Ra, wearing the ‘Atef’-Crown with ram’s horns.
Scene from the “House of Eternity” [TT1] of Sennedjem, west ‘Uaset’-Thebes

The ‘Benu’, the Phoenix, is the sacred bird of On-Heliopolis, the living manifestation of Ra, the Ba (soul) of Ra. The name “Benu” is connected with the word “wbn”, “to rise” (used in relation to the rising of the Stars in the Sky), “to shine”, and to the highly sacred ‘Ben-ben’ stone of On-Heliopolis.

The ‘Benu’-bird is identified with Atum, with Ra, and also with Osiris.  The dating of the “Great Egyptian Year” (also called “the Year of Helios-Ra” and “the Year of the God”, Censorinus, De die natalis 18, 10), is connected with the sacred ‘Benu’-bird, and it corresponds to the life cycle of the sacred Phoenix of On-Heliopolis (Tacitus, Annals VI. 28).

“I am that Great Phoenix which is in On-Heliopolis
I am the one who assigns what exists.
What does it mean?
It is Eternity and Perpetuity
As for Eternity (cyclical time), it is the Day
As for Perpetuity (linear time), it is the Night”
(from the XVII spell of the “Book of Coming Forth by Day”)

“There is a leafy wood fringed by Ocean’s farthest marge beyond the Indes and the East where Dawn’s panting coursers first seek entrance; it hears the lash close by, what time the watery threshold echoes to the dewy car; and hence comes forth the rosy morn while night, illumined by those far-shining wheels of fire, casts off her sable cloak and broods less darkly. This is the kingdom of the blessèd bird of the sun where it dwells in solitude defended by the inhospitable nature of the land and immune from the ills that befall other living creatures; nor does it suffer infection from the world of men. Equal to the Gods is that bird whose life rivals the stars and whose renascent limbs weary the passing centuries. It needs no food to satisfy hunger nor any drink to quench thirst; the sun’s clear beam is its food, the sea’s rare spray its drink — exhalations such as these form its simple nourishment. A mysterious fire flashes from its eye, and a flaming aureole enriches its head. Its crest shines with the sun’s own light and shatters the darkness with its calm brilliance. Its legs are of Tyrian purple; swifter than those of the Zephyrs are its wings of flower-like blue dappled with rich gold.

Never was this bird conceived nor springs it from any mortal seed, itself is alike its own father and son, and with none to recreate it, it renews its outworn limbs with a rejuvenation of death, and at each decease wins a fresh lease of life. For when a thousand summers have passed far away, a thousand winters gone by, a thousand springs in their course given to the husbandmen that shade of which autumn robbed them, then at last, fordone by the number of its years, it falls a victim to the burden of age; as a tall pine on the summit of Caucasus, wearied with storms, heels over with its weight and threatens at last to crash in ruin; one portion falls by reason of the unceasing winds, another breaks away rotted by the rain, another consumed by the decay of years.

Now the Phoenix’s bright eye grows dim and the pupil becomes palsied by the frost of years, like the moon when she is shrouded in clouds and her horn beings to vanish in the mist. Now his wings, wont to cleave the clouds of heaven, can scarce raise them from the earth. Then, realizing that his span of life is at an end and in preparation for a renewal of his splendour, he gathers dry herbs from the sun-warmed hills, and making an interwoven heap of the branches of the precious tree of Saba he builds that pyre which shall be at once his tomb and his cradle.

On this he takes his seat and as he grows weaker greets the Sun with his sweet voice; offering up prayers and supplications he begs that those fires will give him renewal of strength. Phoebus, on seeing him afar, checks his reins and staying his course consoles his loving child with these words: “Thou who art about to leave thy years behind upon yon pyre, who, by this pretence of death, art destined to rediscover life; thou whose decease means but the renewal of existence and who by self-destruction regainest thy lost youth, receive back thy life, quit the body that must die, and by a change of form come forth more beauteous than ever.”

So speaks he, and shaking his head casts one of his golden hairs and smites willing Phoenix with its life-giving effulgence. Now, to ensure his rebirth, he suffers himself to be burned and in his eagerness to be born again meets death with joy. Stricken with the heavenly flame the fragrant pile catches fire and burns the aged body. The moon in amaze checks her milk-white heifers and heaven halts his revolving spheres, while the pyre conceives the new life; Nature takes care that the deathless bird perish not, and calls upon the sun, mindful of his promise, to restore its immortal glory to the world.

Straightway the life spirit surges through his scattered limbs; the renovated blood floods his veins. The ashes show signs of life; they begin to move though there is none to move them, and feathers clothe the mass of cinders. He who was but now the sire comes forth from the pyre the son and successor; between life and life lay but that brief space wherein the pyre burned.

His first delight is to consecrate his father’s spirit by the banks of the Nile and to carry to the land of Egypt the burned mass from which he was born. With all speed he wings his way to that foreign strand, carrying the remains in a covering of grass. Birds innumerable accompany him, and whole flocks thereof throng in airy flight. Their mighty host shuts out the sky where’er it passes. But from among so vast an assemblage none dares outstrip the leader; all follow respectfully in the balmy wake of their king. Neither the fierce hawk nor the eagle, Zeus’ own armour-bearer, fall to fighting; in honour of their common master a truce is observed by all. Thus the Parthian monarch leads his barbarous hosts by yellow Tigris’ banks, all glorious with jewels and rich ornament and decks his tiara with royal garlands; his horse’s bridle is of gold, Assyrian embroidery embellishes his scarlet robes, and proud with sovereignty he lords it o’er his numberless slaves.

There is in Egypt a well-known city celebrated for its pious sacrifices and dedicated to the worship of the Sun. Its temples rest on a hundred columns hewn from the quarries of Thebes. Here, as the story tells, the Phoenix is wont to store his father’s ashes and, adoring the image of the God, his master, to entrust his precious burden to the flames. He places on the altar that from which he is sprung and that which remains of himself. Bright shines the wondrous threshold; the fragrant shrine is filled with the holy smoke of the altar and the odour of Indian incense, penetrating even as far as the Pelusiac marshes, fills the nostrils of men, flooding them with its kindly influence and with a scent sweeter than that of nectar perfumes the seven mouths of the dark Nile.

Happy bird, heir to thine own self! Death which proves our undoing restores thy strength. Thine ashes give thee life and though thou perish not thine old age dies. Thou hast beheld all that has been, hast witnessed the passing of the ages. Thou knowest when it was that the waves of the sea rose and o’erflowed the rocks, what year it was that Phaëthon’s error devoted to the flames. Yet did no destruction overwhelm thee; sole survivor thou livest to see the earth subdued; against thee the Fates gather not up their threads, powerless to do thee harm”

1 Response to ‘Benu’-bird (the Phoenix)

Scribe in the House of Life: Hannah Pethen Ph.D.

Using digital humanities to learn from the past