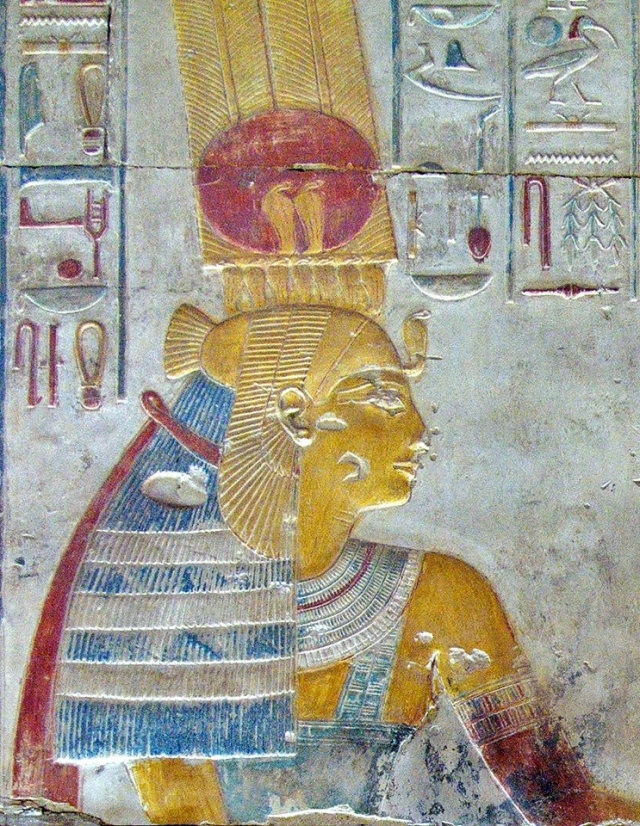 the Goddess Isis wearing the vulture-cap with the Uraeus and the Solar disk with two feathers and two uraei; detail from the Chapel of the Goddess Isis in the “Hall of the Mysteries” of the “Great Temple” of King Sethi I at Abydos 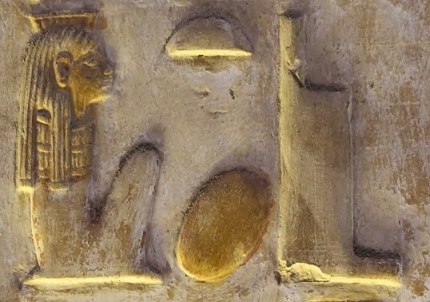 the name of the Goddess Isis written in hieroglyphics:
3st ,
whose egyptian pronunciation preserved in Coptic and attested in the Greek transliterations is
“Ise”/”Isi” [the stress falls on the first ‘i’; both the ‘i’ are pronounced as pure vowels like the ‘i’ of the english word “king”]
Concerning the pronunciation “Aset/Auset”, it is simply a conventional reading invented by the scholars and it does not reflect the real pronunciation of the Egyptian language (as it is written at the beginning of every grammar of hieroglyphs).
Detail from the “Great Temple” of King Sethi I at Abydos

-THE ARETALOGY OF THE GODDESS ISIS FROM KYME (AEOLIS)-

“Demetrios son of Artemidoros, also known as Thraseas, of Magnesia on the river Maeander, fulfilled His vow to Isis. The following was copied from a stone tablet in the city of Memphis, which stood near the Temple of Hephaestos (Ptah):

-LITANY OF THE DIVINE NAMES OF THE GODDESS ISIS IN THE REGIONS AND CITIES OF EGYPT, IN THE EUROPEAN-MEDITERRANEAN WORLD AND IN ASIA-
from the Oxyrhynchos papyrus 1380, dated to the II century CE

Thou Who interpretest first of all in the the Fifteen Thesmoi (the sacred divine laws of Isis),
Queen and Ruler of the World!”

“O Princess, Daughter of Geb,
Ruler of the ‘Merehu’ Bull (a form of Osiris),
‘Tjati’ (Prime Minister) Daughter of Thoth,
Beloved by the Ram,
Great of Favor,
Great of Praise,
Queen of Upper and Lower Egypt,
Lady of Grace,
Lady of all that is encircled by the Sun,
Queen of Upper and Lower Egypt,
Isis the Great, the Mother of the God,
First Royal Spouse of Osiris Onnophris Whose word is right and true,
Divine Mother of Horus, the King, the Mighty Bull.
You are the Beautiful and Perfect Goddess Who has given birth to the Victorious God,
She Who has initiated the Divine Birth of Her son,
the King of Kings, the Prince of Princes:
‘He is Ra!’ it will be said of Him, a King without equals.
In the Sanctuaries there are the cult images of Her elder brother Osiris, the Lord of the nomes,
and His sacred image is where the Gods are;
they come, jubilating, to Him,
He (Osiris) is their Lord, He Who accomplishes everything together with Horus,
and together with Her sister Isis, the guide of Horus without equals,
the beneficial Goddess Who accomplishes everything for Her elder brother.
May Your beautiful face be beneficial to the King of Upper and Lower Egypt, Horus the King (Ptolemy IV) ever living, beloved of Isis, defend and protect Him!”

Isis Mightier that the Mighty, Stronger than the Strong,
Who smites millions by cutting off their heads,
great of massacre against Her enemy.”

-HYMN TO THE GODDESS ISIS-SOTHIS-
from the Temple of the Goddess Hathor at Nitentore (Dendera), East Crypt 4 (Dendera V-103)

(see the page dedicated to Ermoute/Ermouthi)