The Ogdoad of Shmoun/Khmoun (Hermopolis Megale) 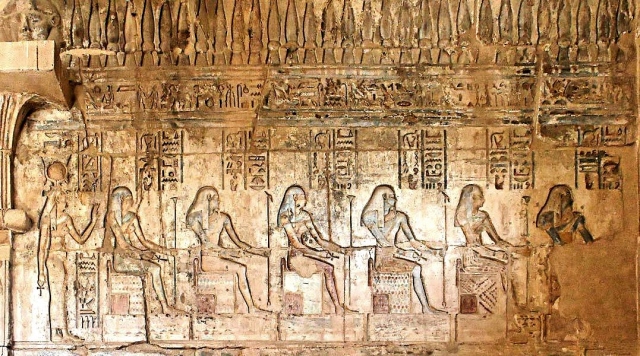 scene from the west wall (north side) of the Pronaos of the Temple of Hathor and Maat, West ‘Uaset’-Thebes:
(from left to right) Hathor “Sovereign of the West, the Eye of Ra, Lady of the Sky”;
and six of the eight Gods of the Ogdoad of Khmoun-Hermopolis Megale:
Kauke and Kek, Hauhe and Heh, Naune and Nun.
On the right (not visible in the photo because that part of the relief is in a museum of Berlin…) are represented also the other two Deities of the Ogdoad, Amon and Amaune together with Amon-Ra, worshipped by King Ptolemy VI, Queen Kleopatra III, and by Their son Ptolemy VII.

The God Nun is the God of the Primeval Waters and the Cosmic Ocean itself. Nun is the “Father of the Gods”, and all the springs, rivers, wells, lakes and other sources of fresh water, including the sacred lakes of the Temples, are His dominion and could be called “Nun”. Also the undulating enclosures of the Egyptian Temples represent Nun and His waters from which the Cosmos arises.