Wtjeset-Hor, the “Place of Extolling Horus”, the highly sacred Temple of Horus at Behdet/Apollinopolis Megale, Djeba, the place of the Revenge: 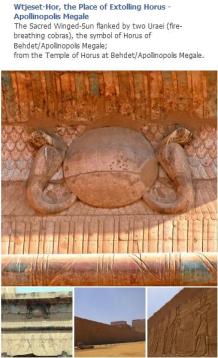 “Long live the Good God, Who makes a memorial in Behdet (Apollinopolis Megale), constructs the Great Seat of Horakhty, completes the Sanctuary of the Holy Winged Orb, and adorns the Mansion of Horus of the Horus-Gods, He the King of Upper and Lower Egypt “Heir of the Beneficent God and of the Goddess Who loves Her Mother the Saviour Goddess, Chosen of Ptah Justiciar of Ra Living Image of Amon”(the King Ptolemy VIII Soter II and the Queen Kleopatra III).
The Great Seat of Ra is built to perfection, the Temple is noble with girdle-wall on all four sides thereof, which “He Who is South of His Wall”(the God Ptah) has fashioned and the Creator Gods have created.

Long live the Good God, Who fashions a memorial in Mesen (Apollinopolis Megale), brightens the Great Seat with His beauty, constructs the “Mansion of the Falcon”(one of the names of the Temple of Horus at Behdet) of the Golden Falcon, and confers benefactions on the Lord of the Sky, He, the Son of Ra, Ptolemaeus may He live for ever, Beloved of Ptah, given life”.
(texts from the frieze-decoration on the exterior of the west and east wall of the Outer Hypostyle Hall of the temple of Horus at Behdet/Apollinopolis Megale)

“Long live the King Horus, of Divine body,
with Whom the Living Apis Bull became united on the birth bricks, the Perfect Youth,
loved by all,
Whom His mother (Isis) caused to appear in glory on the Throne of His father (Osiris),
Who strikes the foreign countries with His strong arm and seizes with His might,
like Ra appearing on the Horizon,
the King, He of the Two Ladies (Nekhbet and Uadjet), Who satisfies the Two Lands, the Strong Bull Who oversees She-neheh (a reference to the Mediterranean Sea), the King of Upper and Lower Egypt the Heir of King Euergetes II (King Ptolemy X) and His sister and wife, the Ruler and Lady of the Two Lands, Kleopatra Berenice III, the Two Philometors, beloved of Horus of Behdet, the Great God, Lord of the Sky, Ra-Horakhty in the Great Seat (Behdet).

This Perfect Place, the nome of Horus-Ra, is His Horizon on Earth, is the House of Appearance of His Majesty (Horus of Behdet),
is the Great Throne of His Ka (the spirit), on which He appears (in the morning) and sets (in the evening),
is the Shrine that Protects Khepry of the quickly born (Sun-)child,
is the place at which His body has been nourished since the First Beginning,
is the Chamber of the Falcon,
is the Ruler’s House of the Ruler,
is the Tomb of the Falcon with the Dappled Plumage,
is the Great Place of the Greatest of the Gods,
is the House of the Strong One of Horus, the Strong Bull,
is the Palace of the Revenger (Horus), Who drives the hot-headed (enemies) from the land,
is the Place of Stabbing of the one who stabs the uamemti serpent,
is the Horizon of Eternity and the Primeval Hill of the God of the Horizon,
is the Shrine of the Divine Winged Solar Orb (Horus as ‘Apy’, the Solar Orb)

-the First Pylon, the Pylon Towers:
“There is a Pylon in front of it (the Court of Offerings), right and left (with it’s two towers), like the Divine Sisters Isis and Nephtys Who raise up the Sun…
Two Pylon Towers (…) stand in front of the Court. (…) Their facade has been decorated in accordance with the texts and all instructions to ward off the foreigners. There are numerous treasuries built into them and two doors leading into the Court of Offerings. One of them, in the eastern Pylon, also leads to the well of Moistening. All together there are six doors in this court, including those in the wonderful Pylon towers…
It’s flagpoles are of conifer (cedar) wood, reach up to Heaven, and are covered with Asiatic copper (bronze); they are the two sisters Isis and Nephtys, Who protect the Prince of the Hedjet/White Crown (Osiris) and watch over the Ruler of the Temples of Egypt (Horus). Two large solid obelisks stand before them and pierce those clouds of Heaven.”

-the Great Inscribed Portal:
“Between the Pylon Towers is a large decorated Gate (…).
Its perfect doors from genuine conifer wood (cedar) are covered with asiatic copper (bronze). Its door-bolts and the frames of its bolt-openings (from sheet copper) are perfect.
All the Lions are ready to act against the foreigners.
Its Great Doors repel the enemies and its Walls keep out the foes (the enemies and the foes of the Gods).”

Scribe in the House of Life: Hannah Pethen Ph.D.

Using digital humanities to learn from the past